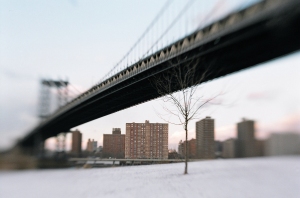 A man walked to Brooklyn from mid-town Manhattan during the blizzard.  He missed the last subway running at 11 p.m. because he was doing his job, shoveling snow. I don’t remember the details, only my own outrage.  Why was I outraged? I was outraged because the news reporters told the guy’s story, and then they left him to walk to Brooklyn from somewhere in Midtown, in the snow and oncoming blizzard.

I wanted to play the news clip for you here on this blog, but I could not find it. My husband says the guy was walking from somewhere on Park Avenue to somewhere in Brooklyn. His memory is better than mine, and, as much as I “search” for a recap of the story, I can’t find it. Coincidence?

Is it that the local TV station  received some heat for not helping the guy, perhaps by giving him a ride in their van, making some phone calls to police, or getting him hooked up with a warm place to sleep?

The man was dressed warmly, and he did not complain about his impending trek.  Am I just an overprotective liberal New Yorker? What would my conservative Arizona son say?

It might be something like, “Ma, Pop Pop (his grandfather, my father) walked to work in the snow. You are an overprotective liberal. The man made the choice to walk. Celebrate the guy’s self-reliance, his fortitude, his American gumption. The reporters probably asked him if they could help, and he probably turned them down.”  Then, knowing my son, he would say, “It’s people like you, Ma, who are ruining America.”

I don’t know. I do know that I’m beginning to see there are so many different perspectives on just about everything.

Join 110 other subscribers
Follow The Nothing Expert on WordPress.com

Follow The Nothing Expert on WordPress.com
Erin Wright is Chicago's Freelance Writer and Editor for All Things Business!
Shades of Green: What shade is your portfolio?
Non-Euclidean Sofa

Exploring the Colorful World of Autism

The Blush Luxe
A Ghost With A Beating Heart

If you wear your heart on your sleeve, join the club.

The latest news on WordPress.com and the WordPress community.

The Joy of Teaching

Share the ups and downs of the teaching life

Reviewing it all - one book at a time!

Getting back to nature in a modern world.

I have issues. So do you.

A literary tour of the USA

the tales and other stuff hiding under my kitchen table

Nature in the Burbs

Taking time to appreciate the nature right under our noses

Starting out from Brooklyn, an amateur naturalist explores our world. "The place to observe nature is where you are."—John Burroughs

Out walking the dog

tracking nature in the city & other NYC odysseys

My Foray Into Food Storage

Photos, and maybe a geeky blog post or two!

a stroll through life

Recipes for life's joys and aches

In our lives there are moments of great beauty that are so fragile, so transitory, that to experience them is pure joy. To share them is to know the essence of living (GWEN JAMES)

The world view from my perch

The Problem with Young People Today Is...
Fresh & Foodie

A food blog with a buzz. Born and raised in Chicago.

Branching: Thoughts of an Ever-Curious Author

The blog of Suzanne Loebl