If, like me, you’re the type who hates driving over bridges, you can probably relate to the one to ten scale that we, gephyrophobics use to measure our anxiety.

A zero to one self-assessment score means you are calm while driving over the bridge.

How calm are you?

You could be eating a liverwurst sandwich with one hand, holding a nice glass of cabernet sauvignon in the other hand, and a tornado could be swirling around you.

A ten self-assessment score means you are very scared while driving over the bridge.

How scared are you?

You’re in that same tornado, but this time:  your sweaty palms separate from your arms; your head exits your body and catapults straight to Neptune; and you feel like your car’s steering wheel is spinning like that nice little girl’s head in The Exorcist.

And, the liverwurst sandwich you ate last night is break-dancing on your left ventricle!

But one thing, at least for me, is true. I still drive over bridges, and after my Ten comes back down to a Zero, I get this crazy idea to write about the experience and maybe help someone else.

Yesterday I drove on my favorite nightmare, The Tappan Zee Bridge. It occurred to me as I was approaching the bridge that there is no net under it.  That’s when my panic attack started. Things that are up high should have nets under them, don’t you think?

Currently, the building of The New NY Bridge is moving ahead. I see all sorts of exciting elements that are going to be included in this New Tappan Zee Bridge, but meanwhile I’m still riding over the Hudson on the old bridge. Nowhere do I see any kind of net, old used mattress, or, even a shore to shore trampoline.  Something must be done. I hope the master bridge builders will do a study on including a net under the New Tappan Zee Bridge.

Driving across the existing Tap, if you’re brave enough to turn your head, you expect to see nothing but sky and seagulls. Not so. There are these grotesque mechanical monsters with flags on their heads, and they are looking down on you. Yikes. They are bridge cranes and they look diabolical. They make me think of Godzilla, a really bad dude who liked to destroy apartment houses, train trestles and bridges.

One day, I found a solution to the Godzilla problem. As I was driving, I pretended I was Fay Wray and the cranes were King Kongs. King Kong loved Fay, and it was a great love story. Maybe if the cranes, grow some fur, I’ll be less fearful. Now, the part about climbing the Empire State Building? Well, maybe only to the second floor.

Are you nervous driving over bridges? 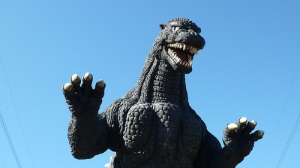 Here is a lovely picture of a big, tall, bridge. Now look up at the big blue sky over the bridge.

Do you see a woman’s head floating around in the big blue sky over the bridge?  The head has dyed brown hair, eyeglasses and a mouth, wide open, screaming.

The head belongs to a woman who is having an out-of-body experience.

The rest of her body is driving (sort of) down there, on the highway on the bridge, three lanes north and three south. The woman’s body is driving south and her car is straddling the center and inside lane. Next to her car, in the outside lane, is a huge tanker truck. Way up in the sky, the woman’s head secretly thanks the tanker for blocking her view of the edge of the bridge. Bridges and their edges make her have panic attacks like she’s having now.

The problem with having panic attacks on bridges and going 11 mph while straddling two lanes in a 50 mph zone, is sometimes other drivers get angry. They line up behind the woman’s car and honk or tailgate. Up in the sky, her head sees them banging on their steering wheels in total frustration, and she feels their pain.

Her head tries to will her body to relax. “Breathe.” she commands her faraway body. “Count to ten. Sing! ‘The farmer in the dell. The f–ker in the dell. Hi ho…’” It’s useless. She can’t get enough air to get the words out.

“This will be the day that I die,” she thinks.

At last it’s over. As her car arrives at the end of the bridge and on to solid road, the woman’s head falls from the sky and reconnects with her neck and the rest of her body. She is spent.

But she lies.  She still drives on bridges, climbs mountain ledges, and rides up the old wooden rickety escalator at Macy’s to the 7th floor Woman’s Department.

So, if you are in some high place, and next to you  is a wacky pear shaped woman, introduce yourself.

You might hear her say, “Hello. My name is Rose, The Nothing Expert, and I am afraid of lots of things that go up.”

Follow The Nothing Expert on WordPress.com
Erin Wright Writing

Shades of Green: What shade is your portfolio?
Non-Euclidean Sofa

Exploring the Colorful World of Autism

The Blush Luxe
A Ghost With A Beating Heart

If you wear your heart on your sleeve, join the club.

The latest news on WordPress.com and the WordPress community.

The Joy of Teaching

Share the ups and downs of the teaching life

Reviewing it all - one book at a time!

Getting back to nature in a modern world.

I have issues. So do you.

A literary tour of the USA

the tales and other stuff hiding under my kitchen table

Nature in the Burbs

Taking time to appreciate the nature right under our noses

Starting out from Brooklyn, an amateur naturalist explores our world. "The place to observe nature is where you are."—John Burroughs

Out walking the dog

tracking nature in the city & other NYC odysseys

My Foray Into Food Storage

Photos, and maybe a geeky blog post or two!

a stroll through life

Recipes for life's joys and aches

In our lives there are moments of great beauty that are so fragile, so transitory, that to experience them is pure joy. To share them is to know the essence of living (GWEN JAMES)

The world view from my perch

The Problem with Young People Today Is...
Fresh & Foodie

A food blog with a buzz. Born and raised in Chicago.

Branching: Thoughts of an Ever-Curious Author

The blog of Suzanne Loebl